In addition to lossless packet capture, Packet Continuum provides extensive real-time alerting and logging features – to identify threats, and to respond and investigate critical events. All alerts and logs listed below are generated as CSV files in real-time, and cross-correlated with the associated PCAP files for each session. Analysts can query all alert/log data, and view logs remotely on the capture appliance, and then (as needed) extract select data in standard file formats (CSV or NetFlowV9 records). 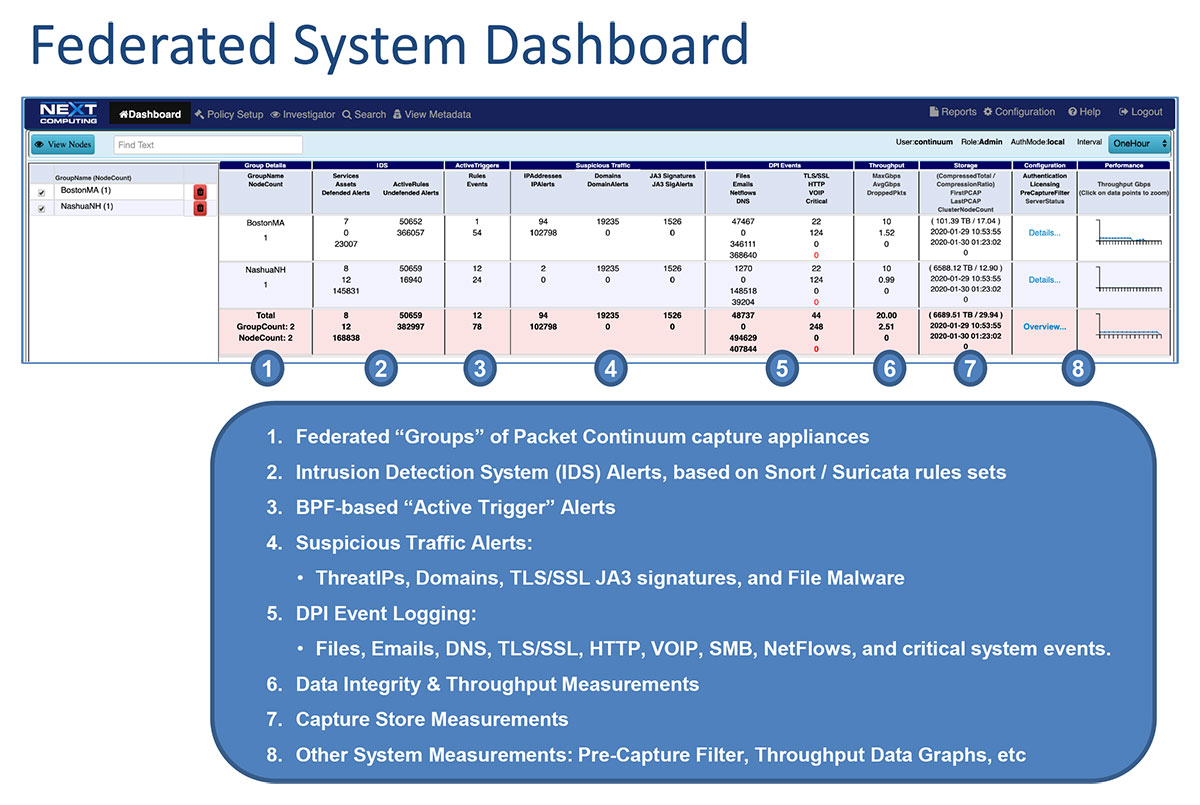 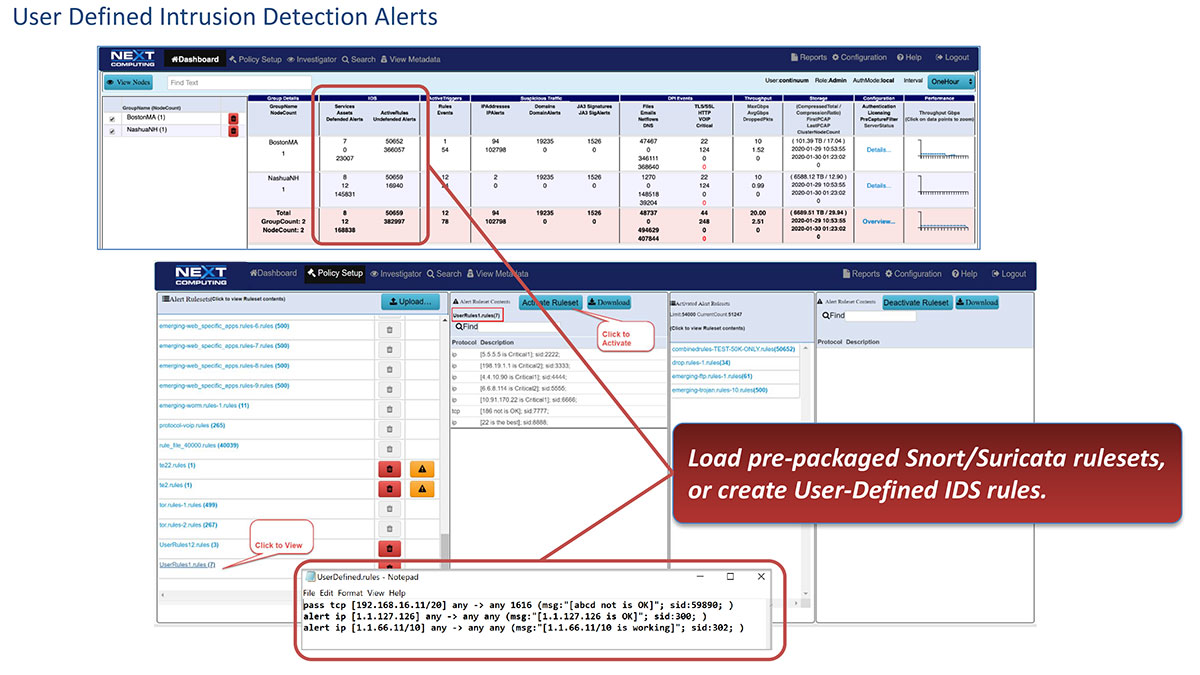 With the Intrusion Detection System (IDS) Alerting feature of Packet Continuum, users may choose to upload and activate Suricata-based rule sets from pre-packaged libraries. With each Packet Continuum software update, these rules are updated to include the most recent threats.

Rulesets are organized using the categories listed below:

Attacks and vulnerabilities(CVE, etc.) regarding ActiveX.

Responses indicative of intrusion—LMHost file download, certain banners, Metasploit Meterpreter kill command detected, etc. These are designed to catch the results of a successful attack. Things like “id=root”, or error messages that indicate a compromise may have happened.

These are autogenerated from several sources of known and confirmed active Botnet and other Command and Control hosts. Updated daily, primary data source is Shadowserver.org. Bot command and control block rules generated from shadowserver.org, as well as spyeyetracker, palevotracker, and zeustracker. Port grouped rules offer higher fidelity with destination port modified in rule.

Same as above, but grouped by destination port.

Collective Intelligence generated IP rules for blocking based upon www.cinsscore.com.

This is a list of known compromised hosts, confirmed and updated daily as well. This set varied from a hundred to several hunderd rules depending on the data sources. This is a compilation of several private but highly reliable data sources. Warming: Snort does not handle IP matches well load-wise. If your sensor is already pushed to the limits this set will add significant load. We recommend staying with just the botcc rules in a high load case.

Category for active and short lived campaigns. This category covers exploit kits and malware that will be aged and removed quickly due to the short lived nature of the threat. High profile items that we don’t expect to be there long—fraud campaigns related to disasters for instance. These are rules that we don’t intend to keep in the ruleset for long, or that need to be tested before they are considered for inclusion. Most often these will be simple sigs for the Storm binary URL of the day, sigs to catch CLSID’s of newly found vulnerable apps where we don’t have any detail on the exploit, etc.

Rules removed from the rule set.

Rules for attacks and vulnerabilities regarding DNS. Also category for abuse of the service for things such as tunneling.

Exploits that are not covered in specific service category. Rules to detect direct exploits. Generally if you’re looking for a windows exploit, Veritas, etc, they’ll be here. Things like SQL injection and the like, whie they are exploits, have their own category.

Example rules for using the file handling and extraction functionality in Suricata.

Rules for attacks, exploits, and vulnerabilities regarding FTP. Also includes basic none malicious FTP activity for logging purposes, such as login, etc.

Rules for the Identification of gaming traffic and attacks against those games. World of Warcraft, Starcraft, and other popular online games have sigs here. We don’t intend to label these things evil, just that they’re not appropriate for all environments.

Malware and Spyware related, no clear criminal intent. The threshold for inclusion in this set is typically some form of tracking that stops short of obvious criminal activity. This set was originally intended to be just spyware. That’s enough to several rule categories really. The line between spyware and outright malicious bad stuff has blurred to much since we originally started this set. There is more than just spyware in here, but rest assured nothing in here is something you want running on your net or PC. There are URL hooks for known update schemed, User-Agent strings of known malware, and a load of others.

Miscellaneous rules for those rules not covered in other categories.

Rules for the identification, as well as attacks, exploits and vulnerabilities regarding Netbios. Also included are rules detecting basic activity of the protocol for logging purposes.

Rules for the identification of Peer-to-Peer traffic and attacks against. Including torrents, edonkey, Bittorrent, Gnutella, Limewire, etc. We’re not labeling these things malicious, just not appropriate for all networks and environments.

Application Identification category. Includes signatures for applications like DropBox and Google Apps, etc. Also covers off port protocols, basic DLP such as credit card numbers and social security numbers. Included in this set are rules for things that are often disallowed by company or organizational policy. Myspace, Ebay, etc.

Signatures for SCADA attacks, exploits and vulnerabilities, as well as protocol detection.

Rules for attacks, exploits, and vulnerabilities regarding SMTP. Also included are rules detecting basic activity of the protocol for logging purposes.

Rules for attacks, exploits, and vulnerabilities regarding SNMP. Also included are rules detecting basic activity of the protocol for logging purposes.

Rules for attacks, exploits, and vulnerabilities regarding SQL. Also included are rules detecting basic activity of the protocol for logging purposes.

Rules for attacks and vulnerabilities regarding the TELNET service. Also included are rules detecting basic activity of the protocol for logging purposes.

Rules for attacks and vulnerabilities regarding the TFTP service. Also included are rules detecting basic activity of the protocol for logging purposes.

Rules for matching on TLS events and anomal

IP Based rules for the identification of traffic to and from TOR exit nodes.

Rules for attacks and vulnerabilities regarding the VOIP environment. SIP, h.323, RTP, etc.

Web client side attacks and vulnerabilities.

Rules for attacks and vulnerabilities against web servers.